The 145 kilometres (90 mi) long Chalakudy River, originates in the Anamudi mountains of the Western Ghats and flows through the Vazhachal Forest toward the Arabian Sea. The river initially runs smoothly but becomes more turbulent as it nears Athirappilly. At Athirappilly Falls, the water surges around big rocks and cascades down in three separate plumes. Below the falls, the river remains turbulent for about 1 kilometre (0.62 mi) until it reaches Kannamkuzhi. Then it calms and flows smoothly until reaching the dam at Thumburmuzhi.

A near threatened great hornbill

Forest wildlife in the area includes the Asiatic elephant, tiger, leopard, bison, sambar, and lion-tailed macaque. The unique 180 metres (590 ft) elevation riparian forest in the Athirappilly-Vazhachal area is the only location where all four South Indian species of hornbills — the great hornbill (the state bird of Kerala), Malabar pied hornbill, Malabar grey hornbill, and the Indian grey hornbill are found living together. If the proposed 163-MW Athirappilly hydroelectric project is built, these unique birds may vanish from these forests because it will submerge the hornbills’ habitat.

Plantations in the area contain teak, bamboo, and eucalyptus. Environmentalists claim that Athirappilly is a one-of its-kind riparian ecosystem in Kerala. V.S. Vijayan, Chairman of the Kerala State Biodiversity Board and former Director of the Salim Ali Centre for Ornithology and Natural History (SACON), Coimbatore, has been quoted in Down to Earth magazine as affirming that the Vazhachal forest division is the second most biodiverse area in the State. The International Bird Association has declared it an ‘Important Bird Area’ and the Asian Nature Conservation Foundation has recommended that the area should be declared a sanctuary or a national park, he points out. The Wildlife Trust of India says it represents one of India’s best elephant conservation efforts. “Any disruption to this fragile ecosystem will spell disaster,” says Vijayan. The river provides habitat for 85 species of fresh water fishes. Among these, 35 are endemic species. This place is the best place to find most animals in the wild.

Waterfalls on the long view 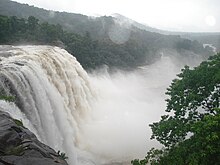 The railway station nearest Athirappilly Falls is 30 kilometres (19 mi) to the west in Chalakudi Railway Station, and the nearest airport is Kochi International Airport, about 55 kilometres (34 mi) southwest of the waterfall and 58 kilometres (36 mi)south of City of Thrissur. Athirappilly is easily reachable from Chalakudy by taxi or by bus from the Chalakudy private bus terminal. Athirappilly is situated on the highways connecting Tamil Nadu and Kerala, amidst thick forest, so night riding is not advised.

The journey from Chalakudy to the Athirappilly Falls passes through a landscape of winding roads, small villages and lush green trees. Visitors can reach the top of the waterfall via a paved path that leads through thick bamboo clusters. A steep narrow path also leads to the bottom of the falls. The falls attract visitors from across India, especially during the monsoonmonths (June–September). About 7 million tourists visit the falls and the Vazhachal picnic spot each year.

Daily Jungle Safari trips are organized by Thrissur District Tourism Promotion Council with Athirappilly Destination Management Council from Chalakudy to Malakkappara. It is the most attractive wildlife watch and Ecotourism Jungle safari through the evergreen forest of Sholayar ranges of Western Ghats – Kerala. It is also the most beautiful Jungle Saffari watching Wildlife in the entire Kerala and is about 90 km across the rain forests of Sholayar ranges. A unique opportunity to experience the rich flora & fauna of Athirappilly – Vazhachal Ecotourim , covering Kauthukapark, Thumboormuzhy Dam & Butterflygarden, Athirappilly water falls, Vazhachal falls, 40 km of amidst thick forests, valleys, lofty peaks, tea garden and wildlife watch. This Jungle safari is a memorable experience ,which one can have on his Kerala visit.

Open chat
Powered by
Nissi Tours & Houseboats is a registered Cab Operator and Tourism Operator in India since 2011. If you are an Intl. customers, couldn't use Whatsapp please submit requirements at Email Id: [email protected] or use Skype Id: nissitours for communicate with us.
Back to
Login
×
Close Panel